We live in a beautiful town just over the Scottish Border called Langholm.

We love living here - it has scenic surroundings, an inspiring textile history and it is an amazing place for Rose’s Wardrobe to grow and prosper. 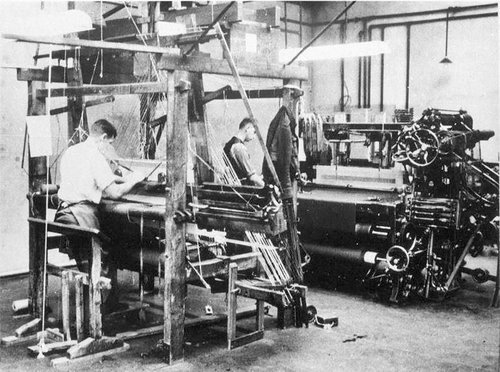 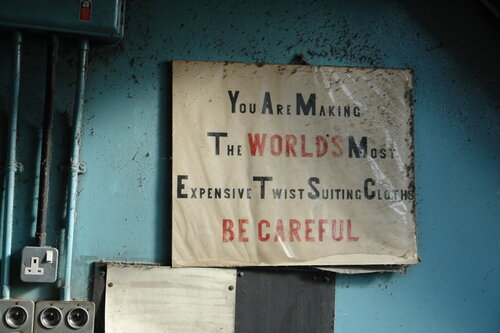 A sign that was hung in the Reid & Taylor Mill 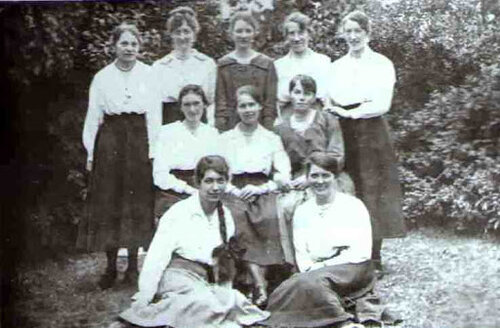 Large spinning mills, employing thousands of workers and processing cotton, were established in Carlisle and the yarn that they produced was hand woven into fabric in Carlisle itself and in many towns and villages within a 20 to 25 mile radius. Langholm was one of these and was renowned for the quality of its output. The first mill in Langholm for spinning cotton and linen yarns, Meikleholm Mill, was built in 1789 for a group of Carlisle merchants. This was followed by Ewes or Whitshiels Mill in 1797 for producing woollen yarn.

During this period various fibres, wool, cotton and linen, were processed and the yarns used for both weaving and knitting. Eventually production in Langholm, settled on yarns spun from wool and woven into woollen fabric – tweed. This product could be made and sold on the basis of quality and design, in which Langholm was renowned.

Alexander Reid was the first to develop tweed manufacture on a sizeable scale in Langholm. He was joined by Joseph Taylor as a partner in about 1850 and the firm of Reid and Taylor, was born. Power loom weaving was introduced by them from 1855. The 1860s saw the building of quite a number of mills. The arrival of the railway facilitated the movement of raw materials and finished products.

Demand in textiles was always volatile, influenced by wars and rumours of wars, booms and times of financial crisis. This resulted in some failures with mills changing hands, sometimes with a change of name and a change of product. The zenith of Langholm’s woollen industry was probably around 1890 with over 1200 people employed in it.

In the twentieth century two world wars and their aftermaths produced high demand followed by periods of recession. The number of companies diminished steadily. In the second half of the century changes in fashion towards less formal wear, the introduction of new technology and the transfer of manufacturing operations to lower wage rate areas of the world combined to reduce the number of workers employed.

Arthur Bell was originally a merchant selling tweeds and overcoatings. He set up his own business in 1868, leaving the family firm John Bell and Sons to be run by his father and brother Edward.⁠

Criterion Mills (which it was its original name) was originally built in 1878 for William Scott and Henry Erskine. However, the company failed and the mill was bought out by Arthur Bell in 1888, complete with all the equipment. ⁠
⁠
At its height, 160 people were employed in the Mill. Workers from Langholm and the surrounding areas would arrive at the mill to begin a day's graft, and left in the evening; no doubt exhausted and hungry but with the quiet satisfaction of having earned their keep. ⁠
⁠
Arthur Bell (Scotch Tweeds) inhabited the Mill until it sadly closed in 2002.

The Bell's Mill was taken over in 2008 by the Langholm Initiative and is now fully occupied. Many of the businesses centre around textiles, such as Drove Weavers, Glen Isla, Yarns to Yearn For, Elliot's Shed.

There has always been smaller scale fabric manufacturing in Langholm and this has increased over the past few years. Elliott’s Shed uses a mixture of hand looms and the power looms in Drove Weavers, where we now proudly call Rose’s Wardrobe HQ. Drove Weavers in going from strength to strength with the resurgence of quality, woven in the UK fabrics.

We are so proud to be contributing to reviving the heritage of Langholm’s textile past by using beautiful fabrics created right here, in Langholm, for our vintage inspired, made to order collections.